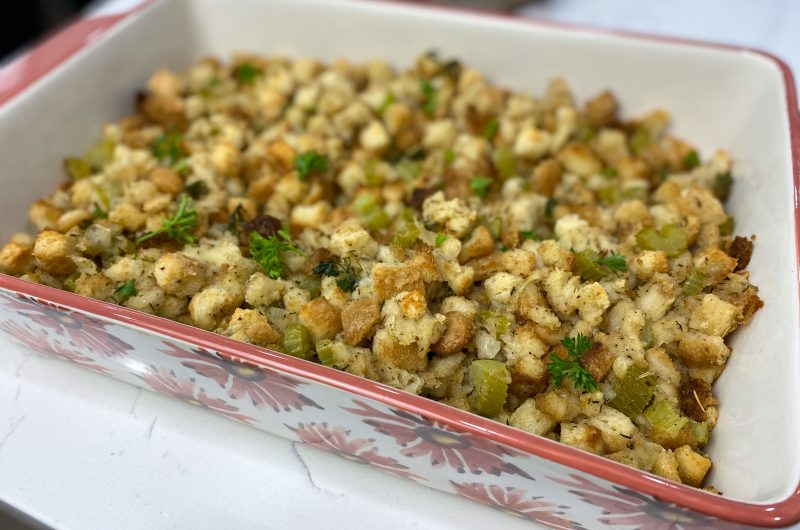 Product links may contain affiliate links. As an Amazon Associate, I earn from qualifying purchases.

If you cook your stuffing outside of your turkey, it’s technically called dressing, not stuffing. But dressing just reminds me of the stuff you put on salad, so I’m going to keep calling it stuffing. Anyway, enough about random stuffing facts! Let’s get to the recipe.

How to Make Easy Stuffing

If you’ve never made stuffing before, don’t be intimidated. It’s really just a bread casserole!

First, preheat oven to 350 degrees F. Next, melt your butter in a large pot over medium heat. Use this cool vegetable chopper to chop your onion and celery! Add your chopped celery and onion, cooking until they are soft. This will take about 10 minutes.

After the veggies are soft, pour the butter/veggies mixture into a large bowl, along will all of the remaining ingredients. Stir it all together gently, but well, making sure everything is incorporated, and being careful not to smoosh the bread.

Add your stuffing mixture to a greased 9×13 baking dish and cover with foil. Bake for half an hour, then uncover and bake for an additional 15 minutes, until the top is golden brown. Enjoy!