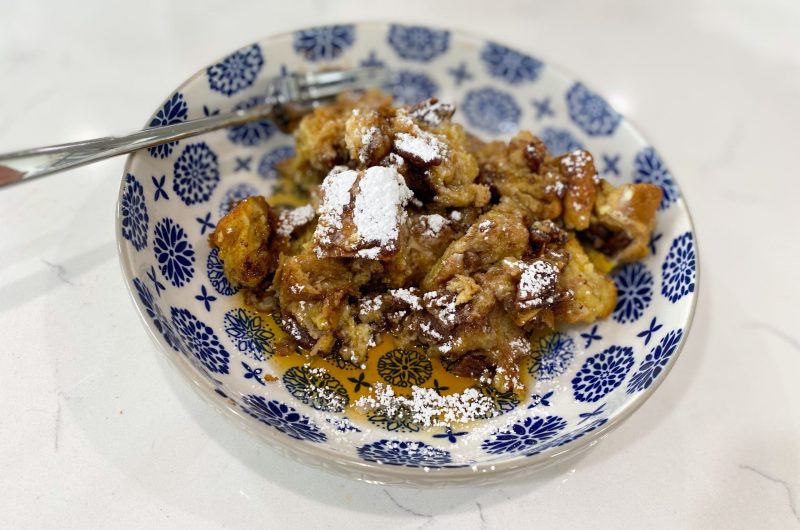 Product links may contain affiliate links. As an Amazon Associate, I earn from qualifying purchases.

You might not think that you can make French toast in a slow cooker, but I’m here to tell you that you can. And it will be one of the most delicious things that you have ever eaten. Slow Cooker Cinnamon Pecan French Toast Casserole is a rich mix of buttery and cinnamon-y carbs and crunchy and spicy pecans. Make this for your next celebratory breakfast!

This French Toast Casserole has all of the good stuff that French toast should have: eggs, butter, and lots and lots of sugar! For this casserole, I used French bread (hey, it is called French toast after all), but you can use whatever bread you like. I know some people like to make their French toast casserole with Texas toast.

Here’s what you’ll need to make this delicious breakfast:

Making French Toast in the slow cooker obviously takes much longer than making it over the stove, but it is so much less work. You don’t have to dip each piece of bread individually or make sure each piece is

Make the egg mixture by combining the eggs, milk, maple syrup, vanilla, cinnamon and nutmeg in a small bowl.

Prepare your slow cooker by spraying it with non-stick spray, or lining it with a slow cooker liner. Find all of my slow cooker essentials here! Place the cubed bread in the slow cooker and sprinkle the chopped pecans on top. Take the egg mixture and pour it all over the bread, stirring it a little to make sure it is all coated.

Now comes the yummy part! Make the cinnamon topping by combining the butter, brown sugar and cinnamon in a small bowl and stirring until crumbly. This streusel mixture really takes this French toast from good to AMAZING!

Sprinkle the streusel mixture evenly over the French toast. Cover and cook on low for 3-4 hours. Serve with maple syrup and powdered sugar on top.

Since this takes about 3-4 hours to cook, this French toast would be great for a late breakfast or brunch. You can prep it earlier in the morning and let it cook until you’re ready to serve it.

I absolutely love breakfast food– don’t understand people who say they don’t like breakfast. I have about a million breakfast recipes on my site. Here are a few of my very favorites. 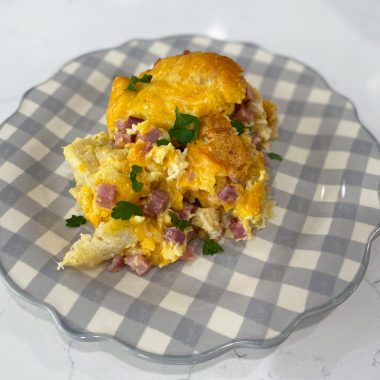 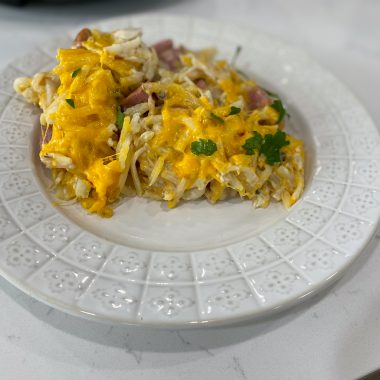 Welcome here! I'm Julia, a wife and mother to two lovely daughters who LOVES cooking for my family! On my cooking channels you'll find delicious and easy family friendly recipes + tips for creating a simple home cooking menu. You only need basic kitchen items to cook with me! Subscribe to my Youtube or my newsletter for new recipes weekly! Thank you for all the support 🧡